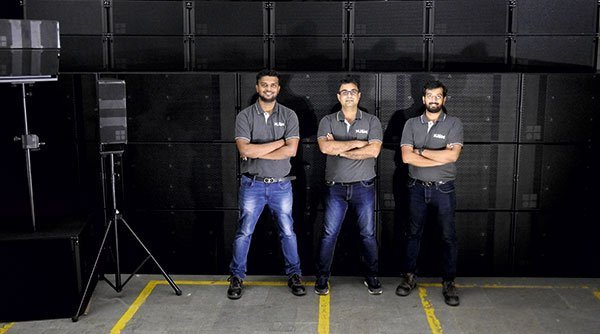 Mumbai Based professional audio rental company – NJSM has become one of the biggest holders of the d&b Audiotechnik systems V series boxes in India, by acquiring an additional 24 boxes of the d&b Audiotechnik V series tops with 16 B22 Subs and 12 T Series tops with 4 V Subs, taking the total inventory to 48 V Series tops, 28 B22 Subs 8 V Subs and 12 T Series tops. The company’s inventory now boasts of over 100 boxes from the d&b family.

NJSM founded by Nixon almost two decades ago has today grown rapidly from when it first started – manufacturing speaker boxes, mainly for churches in and around Mumbai. One of the major reasons behind the growth of the company includes the ownership of d&b audiotechnik boxes, which really accelerated the NJSM growth in the Indian rental market.

The company received their first shipment of 12 tops of d&b V series with dual subs and 4 single subs in December of 2016, facilitated by d&b’s official distributors in India – Ansata. Further in 2017, NJSM needed 40 d&b V series boxes due to some impressive project on the horizon, but the box count at that time stood at 12 boxes. That’s when NJSM decided to add another 12 tops. They also invested in another 8 dual subs. Just one gig had grown their inventory from 12 to 24 tops. On the strength of this newly acquired d&b Audiotechnik V series rig, NJSM successfully delivered outstanding audio support for shows like Sunburn by Percept’s KSHMR and KYGO tours for their Kolkata and Mumbai chapters respectively in 2017 and 2018 kicked off with Nucleya in Belgaum and Amit Trivedi in Mumbai.