The Fireface UCX II is a highly integrated pro audio solution in an ultra-compact format for studio and live recordings. It continues RME’s long tradition of designing compact advanced interfaces, packing into a half-rack size unit what usually would be spread out over two or three 19 inch panels

This unique audio system is capable of transferring analog and digital audio data directly to Windows and Mac computers. The latest Plug and Play technology guarantees a simple installation, even for the inexperienced user. Numerous unique features like a well thought-out Settings dialog and an integrated routing solution realize a quick, comfortable and efficient operation of the Fireface UCX II.

The Fireface UCX II houses two mic/line preamps in XLR combo configuration on the front panel, along with two digitally controlled line/instrument inputs, followed by a headphone jack, various control buttons, a display, and the main volume knob. At the rear is a set of ten analogue balanced line inputs and outputs, MIDI I/O, ADAT I/O, AES/EBU and SPDIF I/O, USB 2.0 as well as a switchable word clock I/O.

With the SteadyClock FS, the Fireface UCX II features the latest clock and jitter rejection technology from RME. Based on a femtosecond clock, SteadyClock FS reduces the intrinsic jitter when converting from and to analogue over all digital formats to a new all-time low. 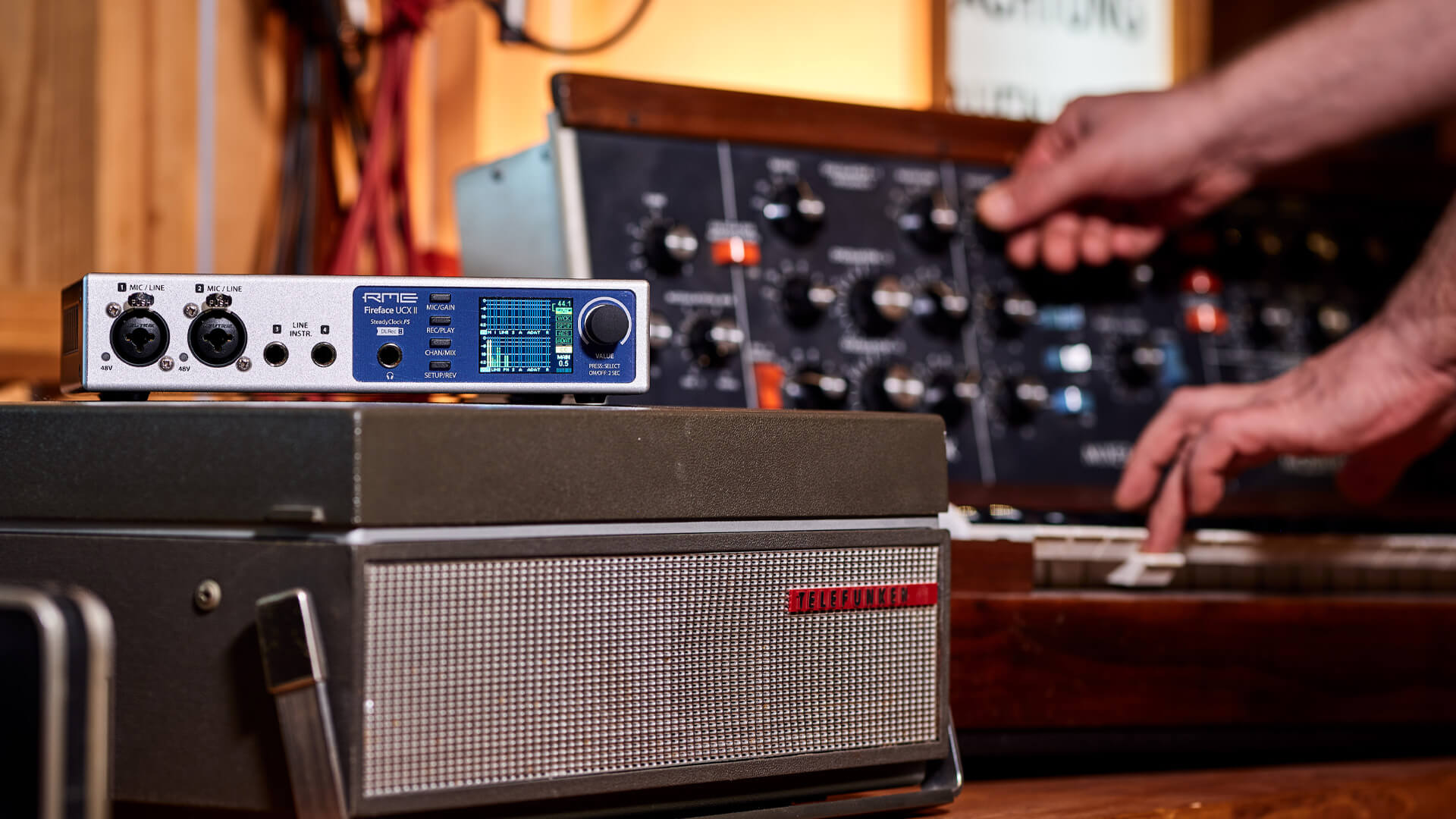 Control all device states directly from the front panel for convenient, direct access to all features. Four keys and the encoder, the high-resolution and clear color display, and a well thought-out menu structure enable the user to quickly change and configure the device’s settings. Additionally internal memory allows for the permanent storage of six different states of the unit. Therefore the Fireface UCX II is able to operate fully stand-alone, without any connected computer. In stand-alone operation it can transform into totally different devices by the simple click of a button. Furthermore TotalMix FX can also be controlled via MIDI.

DURec is an integrated digital recorder for all inputs and outputs directly to USB memory devices via the rear USB port. It allows to record on USB thumb drives or hard drives with up to 2 TB capacity. The recording functionality is provided by the internal DSP, and is therefore independent from a connected Windows or Mac computer. This USB port can alternatively be used for direct connection of RME’s optional ARC USB remote control.

The Direct USB Recording converts the Fireface UCX II into a stand-alone field recorder and a powerful multichannel live player for previous recordings, e. g. for virtual sound checks. Live concerts, band rehearsals or spontaneous jam sessions can be directly recorded and played back from the medium – even completely stand-alone without computer or software. All input and output channels can be individually chosen for recording and playback. 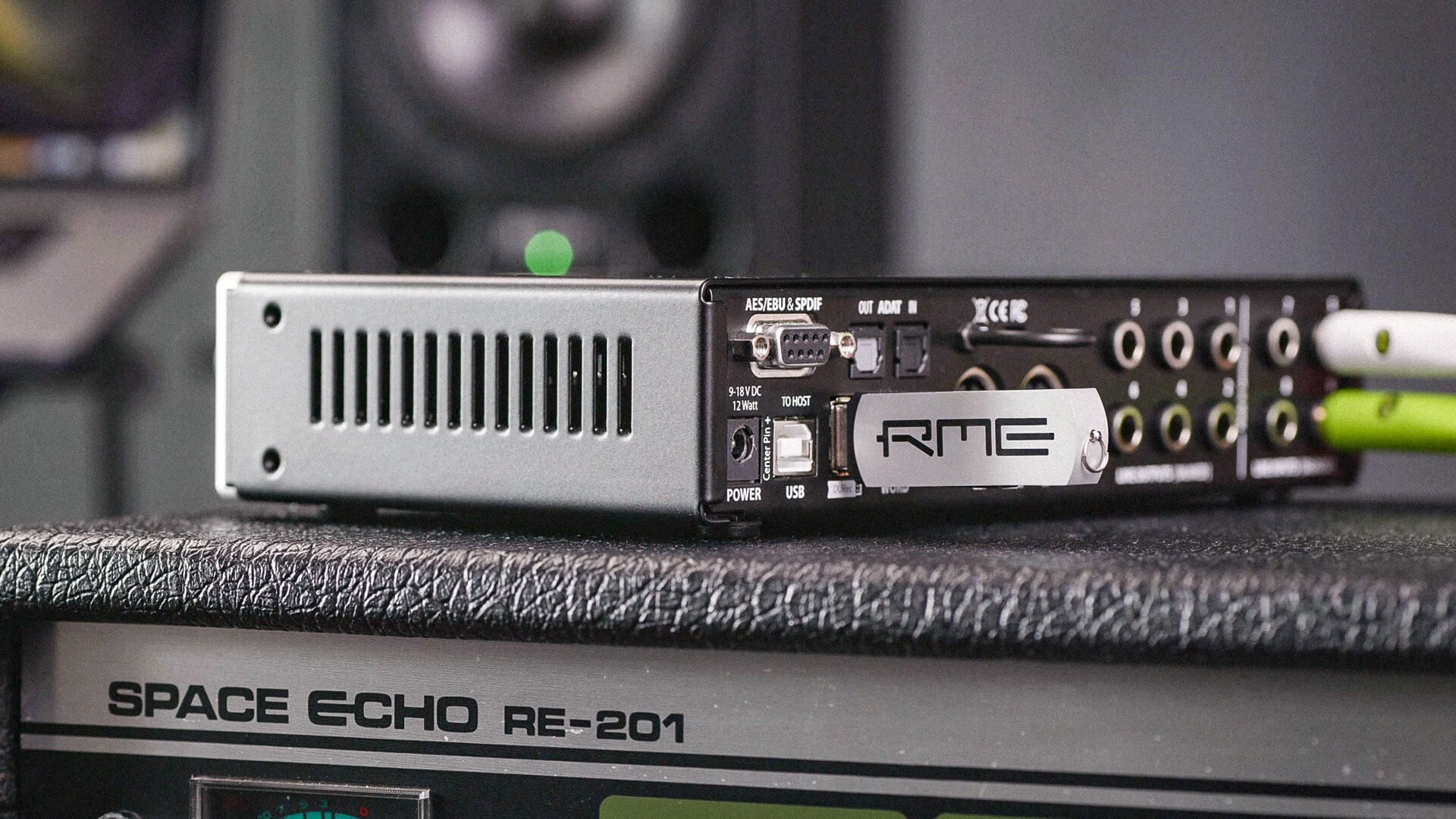 The Fireface UCX II comes with the TotalMix FX DSP mixer offering comprehensive routing and monitoring options, as well as the DIGICheck Analyzer allowing to measure and analyze the digital data feed in both directions with maximum precision. TotalMix FX can completely replace an external mixer, enabling the creation of multiple latency-free monitor mixes with EQ, Dynamics, Reverb and Delay for any outputs, incl. main monitors and headphone mixes for musicians.

The additional TotalMix Remote is a remote control for TotalMix FX, to control the hardware mixer and effects in RME audio interfaces. TotalMix Remote mirrors the current state of the host system on the iPad and Windows/Mac computers – the entire mixing state, the complete routing, all FX settings, up to the level meters, and everything in real-time. Easily adjust all the mixer and FX settings from a distance, via Ethernet and WiFi. 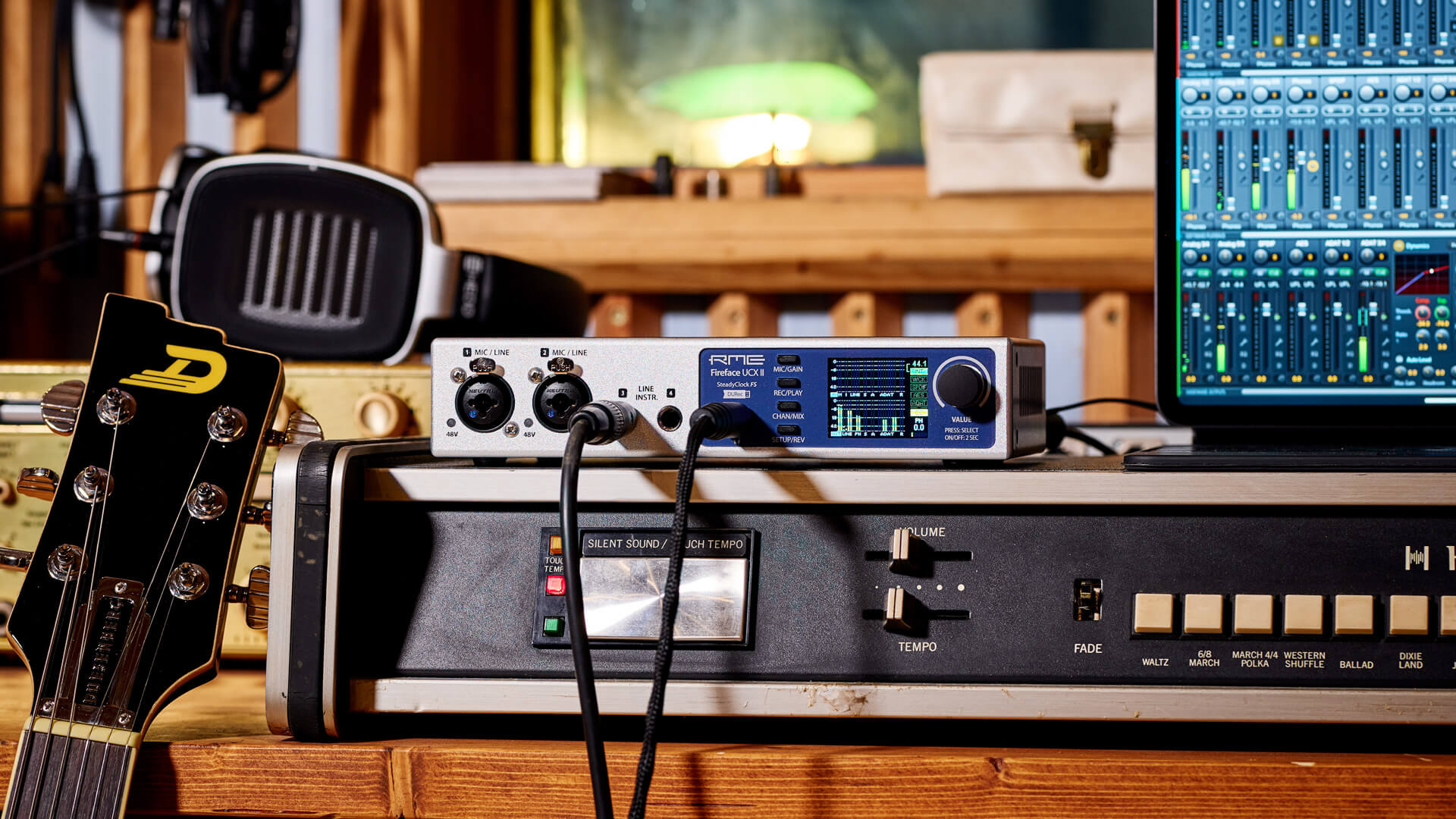 TotalMix FX and DigiCheck are included with your RME Audio Interface

Most audio interfaces are traditionally designed with what is called ‘AC-coupled outputs’, where capacitors are used to filter out any extreme low frequencies.

Whilst these frequencies are generally considered undesirable for audio – eating into headroom and potentially causing damage to other equipment – one instance where DC-coupling remains desirable is the world of modular synthesizers, where static or slow-moving signals are used for control over various parameters such as pitch note values or LFOs.

All of the Fireface UCX II’s line-level outputs are fully DC-coupled, allowing for the sending of control voltages (CV) or Gate information to modular synthesizers (such as the popular Eurorack and Moog/MOTM/Synthesizers formats) and other studio hardware. 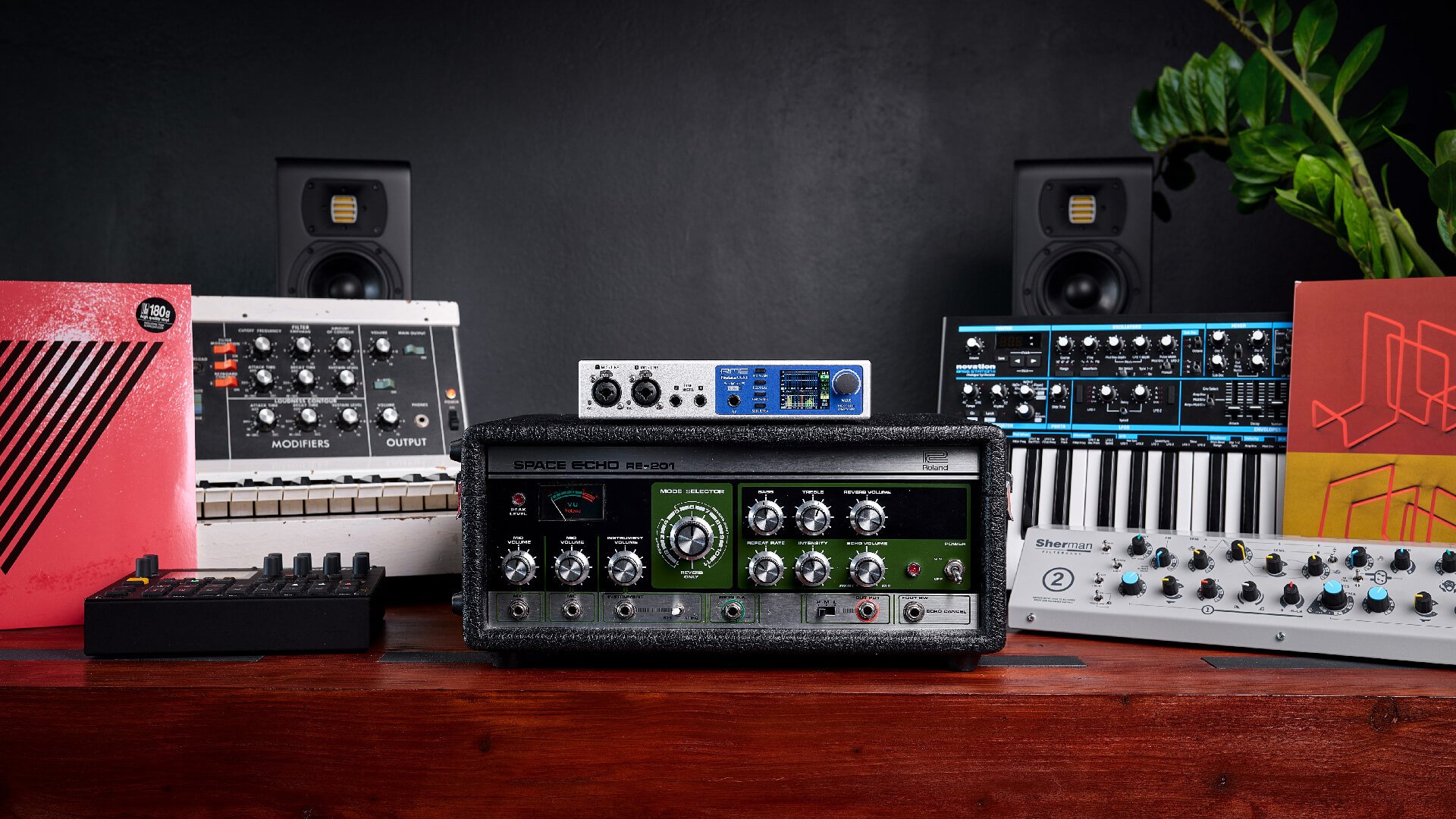 The Fireface UCX II operates in two different modes: driver-based USB2 and Class Compliant. The Class Compliant mode is a standard that is natively supported by operating systems like Windows, Mac OSX and Linux distributions. No proprietary drivers are required, the device will be directly recognized when the CC firmware is loaded. The natively available features will be limited in comparison to those provided by the RME driver for the UCX II. 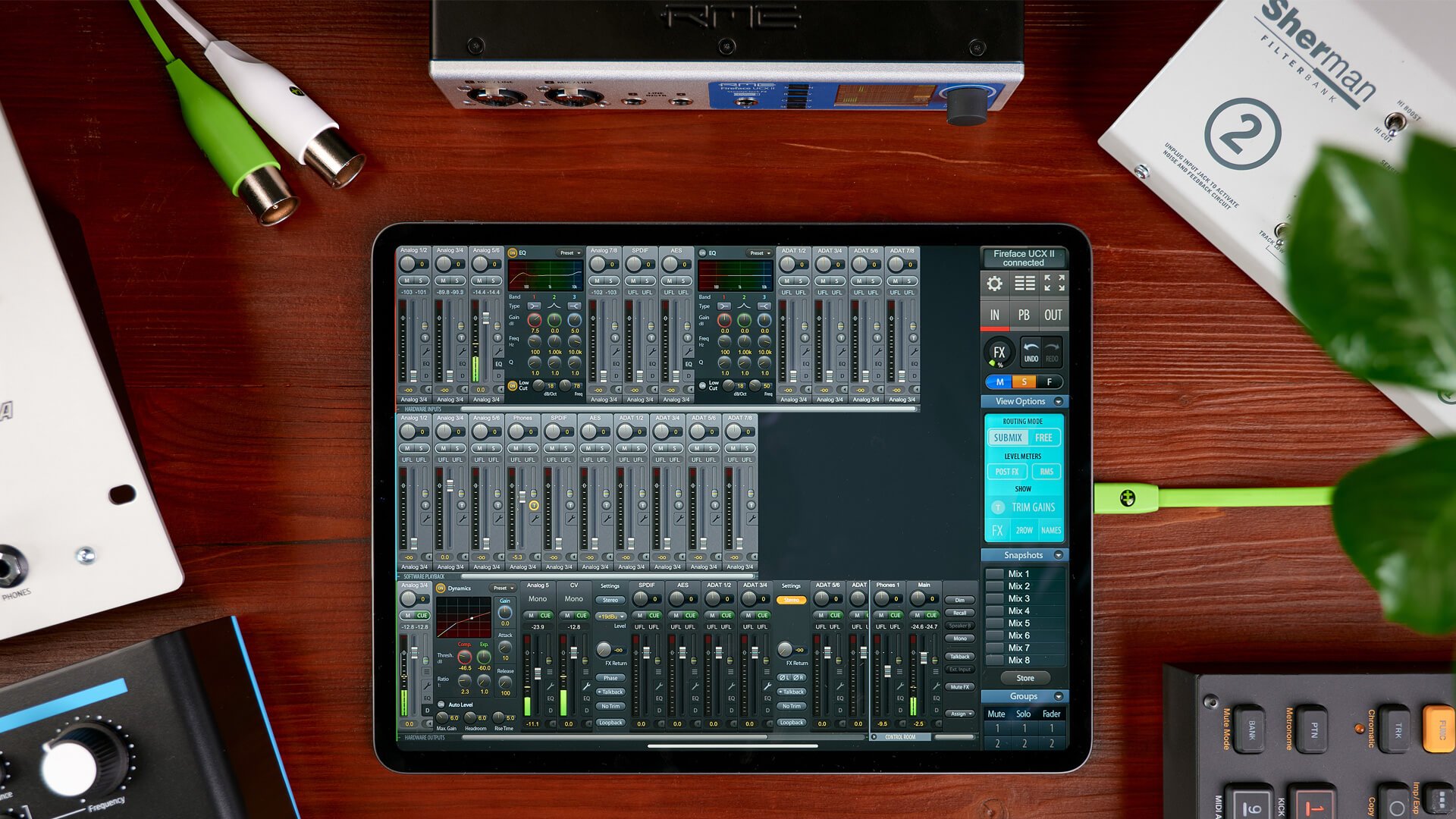 Professional analog I/O connections for iOS and other operating systems 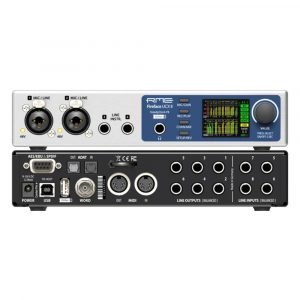