The ADI-2 DAC includes an improved SteadyClock, a fine-tuned to perfection analog circuitry, new MRC remote control, Extreme Power headphone output and a very special IEM output. It has all the bells and whistles that made the ADI-2 Pro famous, including its perfectly transparent sound signature and full DSP processing with Bass, Treble, Loudness, 5 Band Parametric EQ, Crossfeed and much more. With its simplified operation and stunning design it is the ideal center piece from home listening up to studio reference playback.

The ADI-2 DAC is the home and hi-fi optimized version of the ADI-2 Pro, a studio AD/DA converter of the highest quality. With many fresh ideas, innovative features and numerous useful functions, the ADI-2 DAC quickly became the reference. Thanks to its combination of high-end DA conversion with two exceptional headphone IEM outputs and a remote control, it has received countless enthusiastic reviews for its sound, flexibility, and technical capabilities.

The current version of the ADI-2 DAC comes with an extended remote control, a further improved DA conversion and an adapted analog output stage for even better noise and distortion values. To address the home and HiFi users, RME exchanged some of the Pro’s studio features with typical home and HiFi ones. With an adapted feature set and much simplified operation RME proudly presents the ADI-2 DAC. Built on the technology, concept and features of the ADI-2 Pro, the DAC concentrates on DA conversion in top high-end quality, along with two exceptional headphone and IEM outputs. 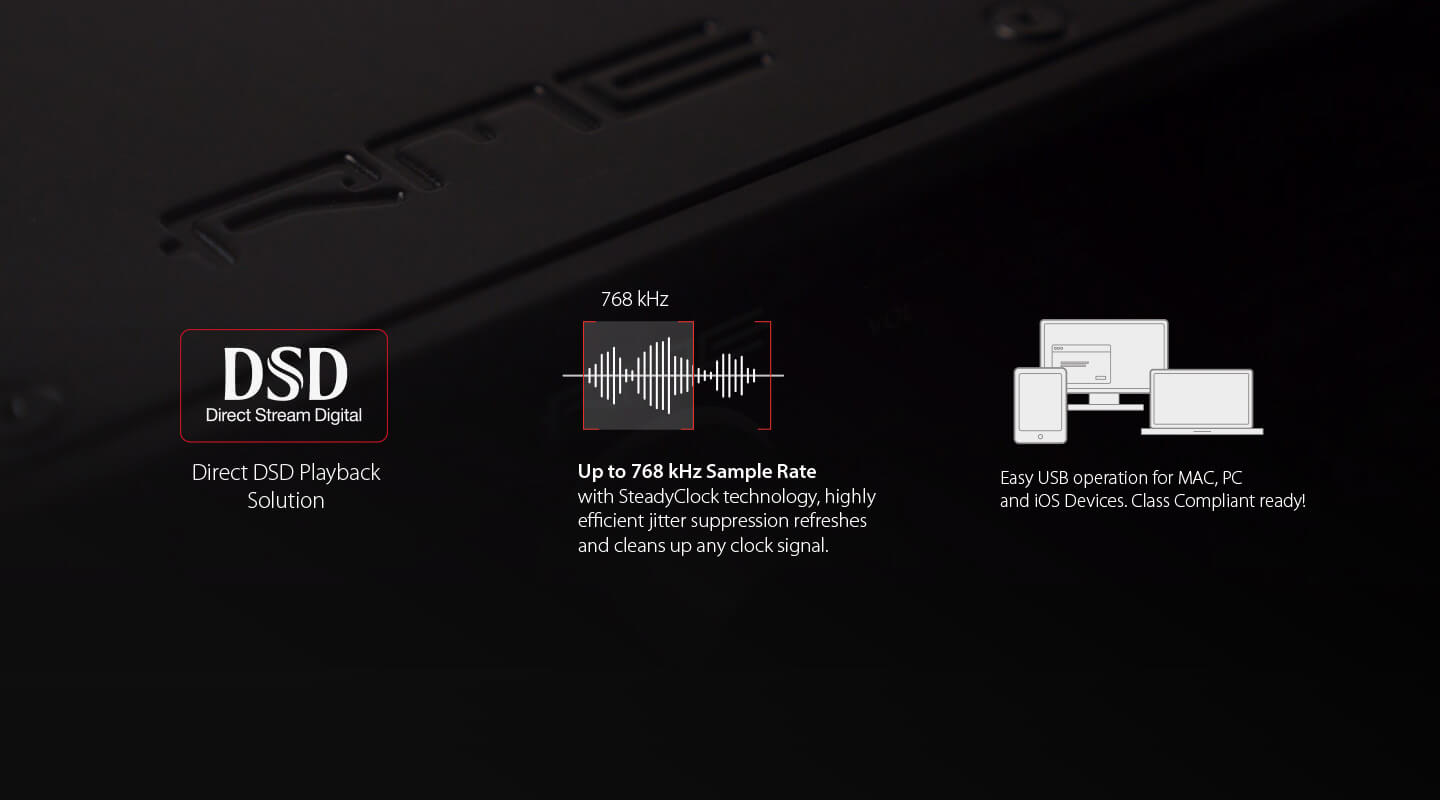 Packed into the compact half 19” format factor, this little gem is filled with the finest high-end electronics, offering a reference class conversion from SPDIF coaxial, SPDIF optical (ADAT compatible) and USB to RCA, XLR, TRS and mini-TRS.

The updated ADI-2 DAC uses AKM’s AK4493 in a special circuit variant developed by RME engineers that allows the chip to perform at its best. With noise levels of 123 dBA, distortion less than -120 dB, or THD+N of -116 dB, the device delivers outstanding measured values. Even the IEM output, with -118 dBu already the world’s lowest noise headphone output, improves to a sensational -121 dBu. In addition, there is 4 dB of digital headroom, so that even high intersample peaks do not produce any audible distortion. Finally, the device now also offers a clear reserve in volume setting. +2.5 dB result in a still undistorted analog output signal.

All these improvements are completely transparent in the previous menu navigation. There are no changes in operation, features and behavior compared to the predecessor, which is why neither appearance nor name have changed. The only difference: with ‘Low Dispersion’ another digital filter is available for selection. Explanations for this filter can be found in the detailed manual of the ADI-2 DAC.

The headphone revolution not only brought headphones but also IEMs (in ear monitors) back into the attention of audiophiles and music lovers. Modern IEMs have a reference sound that easily competes with bulky over-ear headphones, making them not only a mobile alternative, but also an interesting solution in home.

Modern IEMs are extremely sensitive and operate on very low voltages. As a side effect they uncover the noise floor of the player, DAC or headphone amp. When RME developed its Extreme Power headphone stage the basic noise floor was taken care to be as low as possible. Which was then confirmed in many reviews (most black background…). Even when used with IEMs.

Still RME wanted to make sure that even the most sensitive IEM combined with the most sensitive listener receive the full dynamic range on playback. Also capable outputs like the Extreme Power ones are not fully safe against operating errors and might blow up ears or IEMs.

RME’s solution: adding the most advanced IEM output imaginable as second phones connection to the front of the ADI-2 DAC. Its ground noise floor is an astounding 10 dB lower than the one of the Extreme Power output (black hole background…), output impedance is near zero Ohms, THD reaches new record lows, click-free on/off is included as well as volume ramp-up, and the sound quality with any IEM is just amazing. We’re sure you will love it! 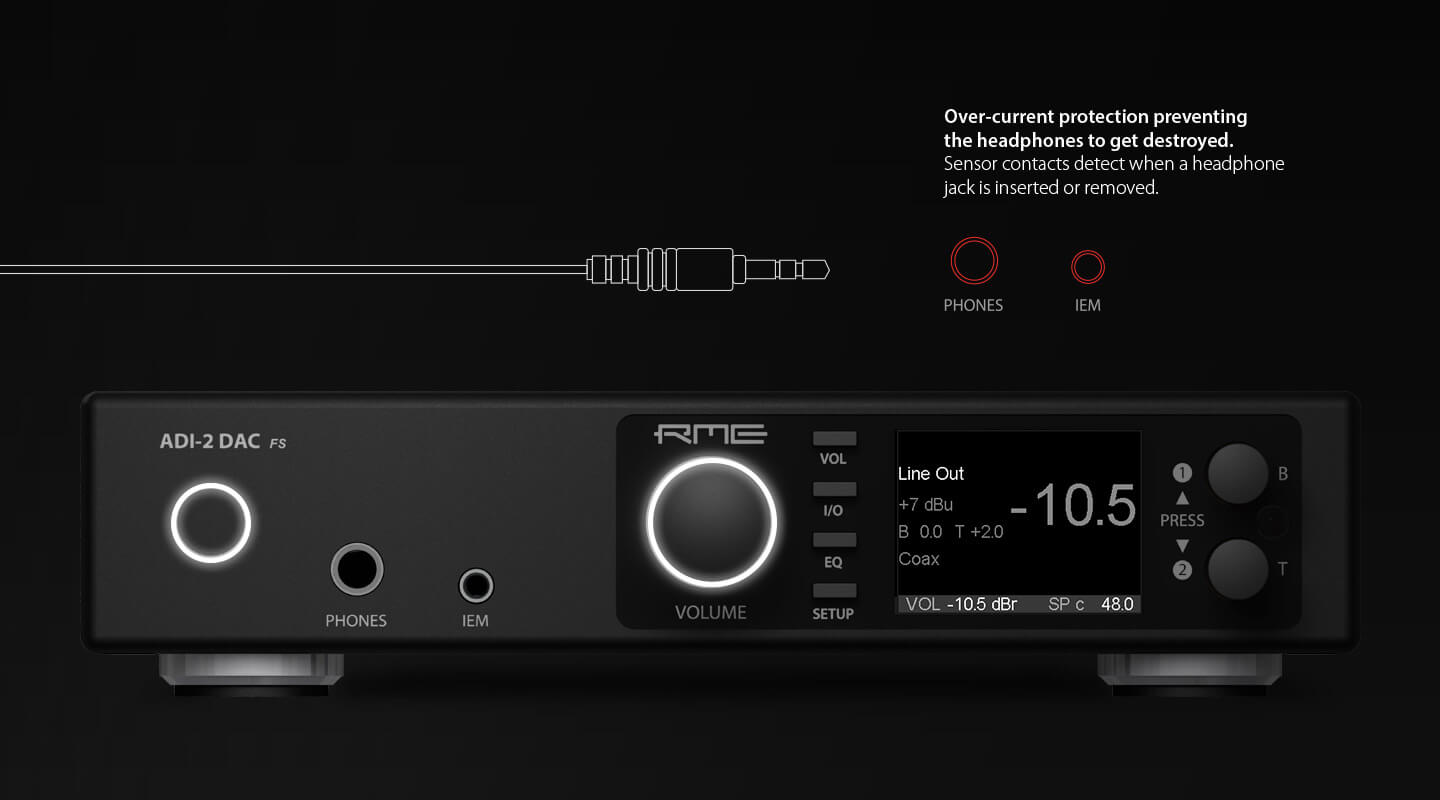 A studio converter with all lights off? Defective. But on a DAC it was one of the most often requested features from our ADI-2 Pro HiFi customers. Here we go: display, function keys, volume knob, even the standby button – they all go off after 10 seconds of no user operation when AutoDark is activated in the unit’s menu. Touching any button or control will turn on all lights for 10 seconds. Using the remote AutoDark can also be switched off / on, and using any button on the remote turns lights on for 3 seconds. Once again: we’re sure you will love it! 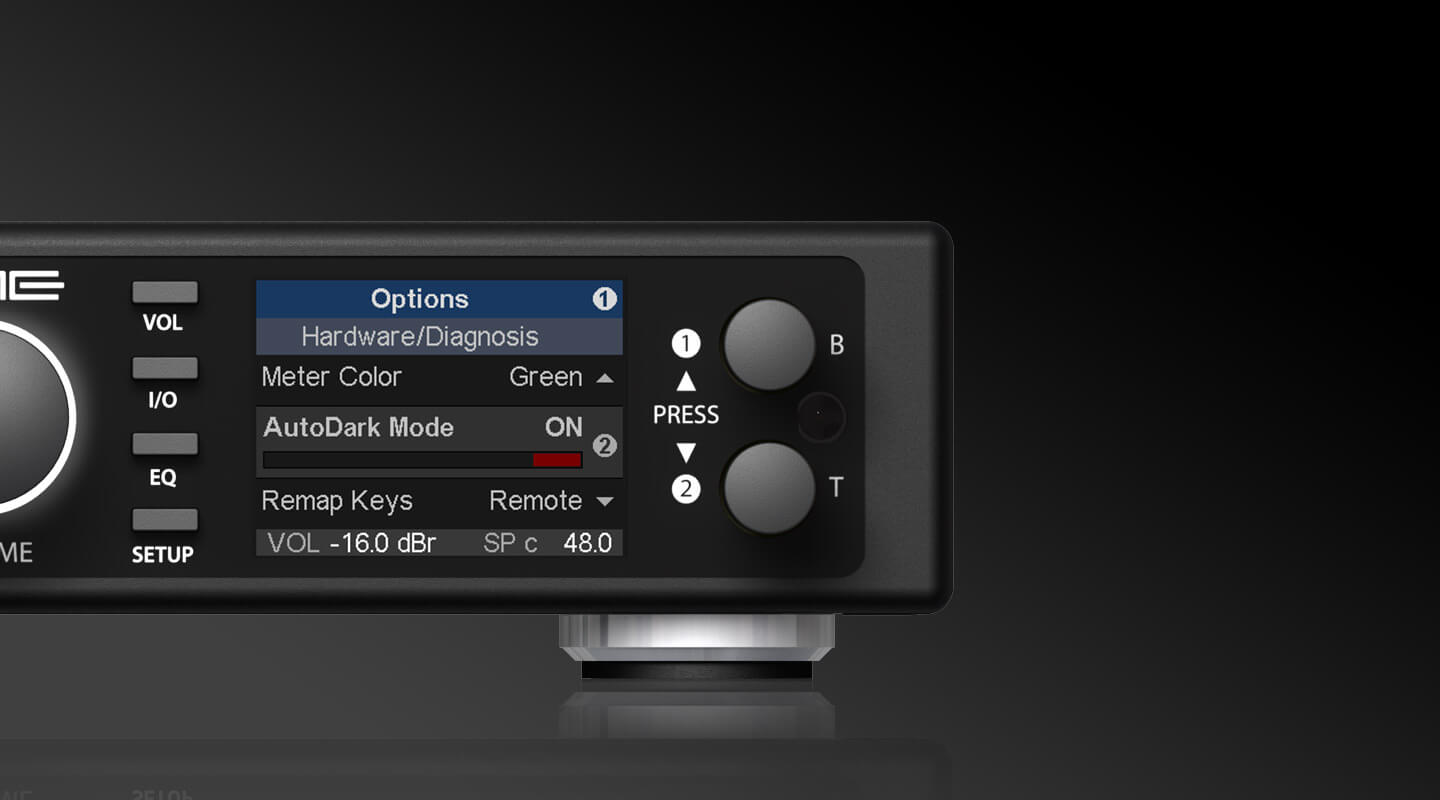 The ADI-2 DAC comes with a remote that is not the usual cheap add-on. This nicely designed remote control has clearly labeled buttons, readable even in low light conditions without reading glasses, a nicely laid out button arrangement that is easy to remember, and perfect button ergonomics. Plus: It won’t interfere with your ATV or other devices. 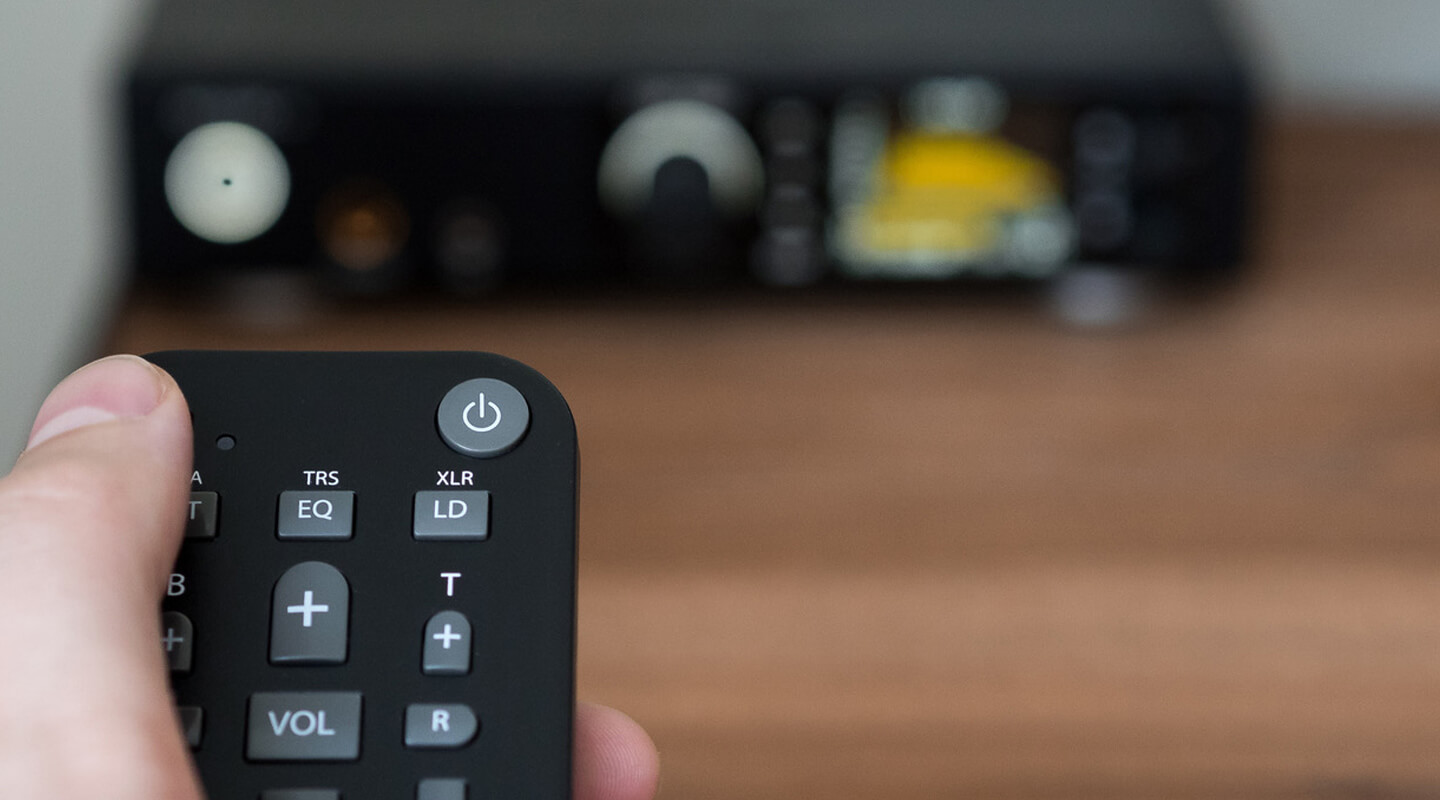 The ADI-2 DAC remote control provides buttons for standby on/off, volume, balance, bass and treble, input selection (optical, coaxial, USB), mute, on/off loudness, bass/treble and EQ. In addition, there are four programmable buttons that provide access to 32 different functions and commands for maximum flexibility. There is no other converter or comparable device with such a sophisticated, easy to use and at the same time versatile remote control!

Note for owners of the previous remote: the new MRC is also available separately as an accessory. It can be used with all ADI-2 DACs, even older ones, if they are equipped with the latest firmware (at least version FPGA 27, DSP 33). 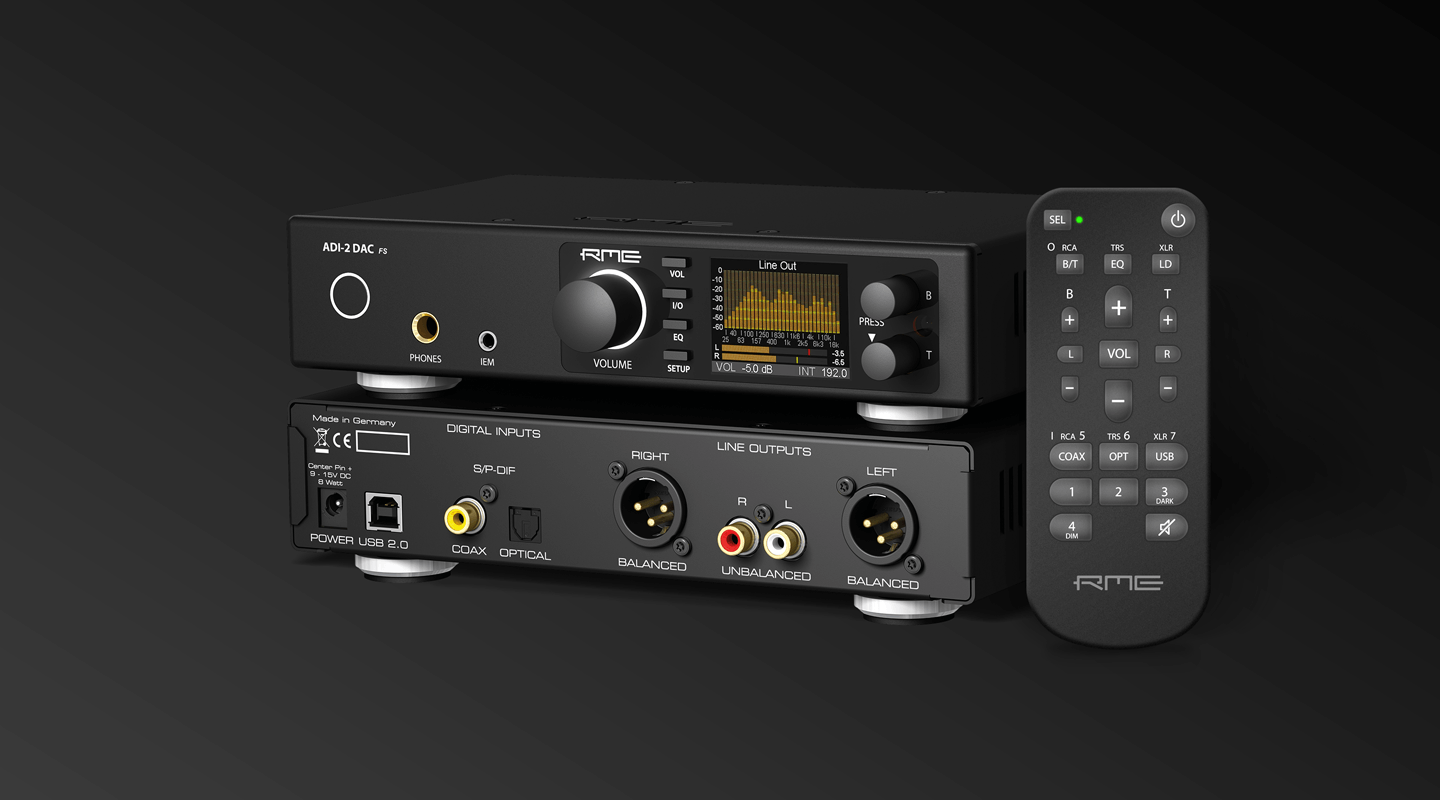 The ADI-2 DAC is the first device in RME’s range with SteadyClock FS. There is not much to improve with SteadyClock, it has earned its accolades over years of flawless operation in numerous RME devices, guaranteeing that using the internal clock will produce exactly the same sound as when using an external one. SteadyClock highly rejects jitter and handles all digital interface formats in an exemplary way. That’s why SteadyClock’s design and behavior didn’t change in the DAC.

With SteadyClock FS the focus was put on reducing the self jitter of SteadyClock to new lows, by improving its second, analog PLL circuit, and referencing both Direct Digital Synthesis and PLL to a low phase noise quartz crystal. The self jitter measured through DA conversion now reaches levels that usually are only available in master quartz clock mode, while SteadyClock still always runs in PLL mode – no matter if internal or external clock, sound is exactly the same (again). The low phase noise oscillator driving the updated circuit reaches jitter specs lower than a picosecond (ps), an area called FemtoSecond. Hence SteadyClock FS.

A bit test is used to check the playback path for unwanted changes in the playback data. Playback software can cut bits, add dither, or change the level – without these changes becoming noticed easily. A poorly programmed driver can manipulate bits, and a playback hardware could be both badly designed and defective (hanging bits, swapped bits). Even such features as proper channel assignment, left/right synchronicity and polarity can be tested by a well-made bit test.

With a bit test, such errors can be detected and – more importantly – excluded.